“Being a refugee in Malaysia is very difficult” 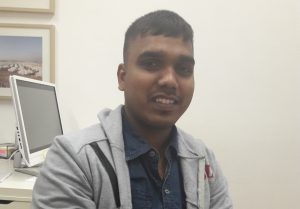 Kobinath Sithambaram is 29 years old and from Kilinochch, Sri Lanka. In 2009, he had to flee to Malaysia. He was arrested several times in his hometown and the army requested him to enter the forces.

During his flight, he lived in Colombo, Malaysia from 2009 until 2012. He has worked there as a gardener and other jobs. In 2012, he left Malaysia for Indonesia, where he and his friends lived in a status of residential irregularity.

Kobinath tells us. He described the situation there as very bad.

He then left for Indonesia by boat, alongside some friends. The police arrested them upon arrival and they spent three years in prison.

Kobinath learnt about the possibility of admission to Germany already in Malaysia. He had talked to UNHCR there and had a registration card, however nothing happened for a Long time. In Indonesia, other persons came to the prison and conducted interviews with us. Then the waiting began. In total, 60 people got picked up from the prison with me.

Kobinath came to Germany with five friends he met in Indonesia.

It was a long journey

says Kobinath about the admission procedure. From Indonesia we went to Singapur, then to Turkey and then to Hannover. The first two weeks in Germany him and his friends spent in the initial reception centre Friedland. In November 2014, he learnt that he will be moving to Munich.

Kobinath says he is doing well in Munich. His spouse could join him in the meantime via the family reunification programme.

Kobinath tells about his life in Germany.

According to Kobinath, the admission procedure was okay. The support in Munich has helped him and his friends a lot. Until this day, he is in contact with Save Me München. They also supported him during the family reunification process for his wife.