Libya-Rwanda Evacuation Mechanism: Norway offers to resettle up to 500 refugees 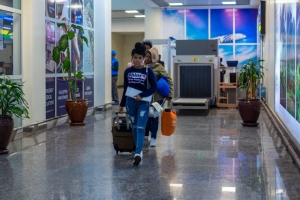 In September 2019, Rwanda’s government signed an agreement with the African Union and UNHCR according to which it declares its willingness to evacuate up to 500 refugees from Libya to Rwanda. The living conditions in Libyan refugee camps have been described as disastrous by different NGOs.

The evacuation mechanism to Rwanda is carried out similar to the emergency-transit-mechanism through which UNHCR has been evacuating refugees from Libya to Niger, Rumania and Italy since 2017.

The evacuated refugees, who are primarily from Eritrea, Somalia and Sudan, are accommodated in the Gashora Transit Centre where their asylum claims are processed with the support of UNHCR. Some of the recognized refugees will be resettled to third countries while others will receive a permanent residency in Rwanda.

At a press conference in the beginning of January, Rwanda’s Foreign Affairs Minister Dr. Vincent Biruta announced that Sweden had already taken in seven of the evacuated refugees. Furthermore, the Norwegian government agreed to resettle up to 500 of the refugees who came to Rwanda through the emergency-transit-mechanism.

EU Resettlement Program 2020: Germany pledges 5.500 placesIncrease of the resettlement quota to 1.600 persons per year by the Conference...
Scroll to top