“A refugee who works is no longer a refugee; instead, he’s a colleague.” 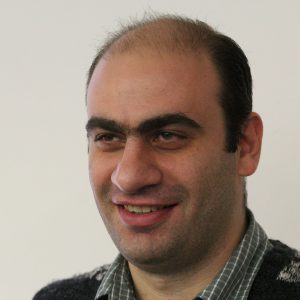 “I’ve experienced a lot. I was exposed to bombs and my life was in jeopardy twice in Aleppo. But that no longer plays a role. Now, we all have to find our places in work, training, or study,”

says Melou Garabett. In only two years in Germany, he has already accomplished a great deal. He is fluent in German, has completed multiple internships, and is now preparing for a German examination, which he needs in order to study at a German university, with a scholarship from the Otto Benecke Foundation. Dedicated volunteers supported him the most at the beginning of his time in Germany, he says. Now, he volunteers to help refugees as a translator at administrative meetings and describes his own experience to newly arrived resettlement refugees at informational exchange meetings, through the “resettlement.de” project.

Melou Garabett came to Germany in 2014 through a federal humanitarian admission program. Before that, he lived in Lebanon for over a year. He fled there from his home city, Aleppo, after the army would have conscripted him. Melou Garabett has a degree in economics, but in Syria he worked for his father’s workshop as a welder, because as an economist there was little to no chance that he’d find work. After he was accepted into the federal admission program, he attended a preparation course offered by the International Organization for Migration (IOM). In the four-day course, he received a great deal of information about living in Germany. “That was very useful,” he says.

“We learned not only how to sort trash in Germany, but also how everyone in Germany has freedom of religion.”

The religious freedom was especially important to him, as an Armenian Christian.

The course was offered by a Lebanese woman who had never been to Germany, and consequently had some misinformation, he says. It would have been useful for him to also learn about difficult aspects of life in Germany. For example, it would have been good to know that Germany differs greatly from region to region and that, in some locations, it can be difficult for refugees to find an apartment.

After his arrival in Germany, he spent two weeks in Friedland and then was sent to a town in southern Germany, where he still lives today. The beginning, which he spent in a refugee home, was very difficult. The shelter felt like a jail. Luckily, he quickly made contact to a voluntarily active retiree, he says. It is unfortunate that many refugees have difficulty building contact with Germans, he says, and that also is related to the housing situation of many refugees. Due to this, he found his own apartment as quickly as possible.

he explains and laughs. After he finished the integration course, he attended an orientation course which discussed German politics and society. “Politics, that’s my subject, and I loved the course,” enthuses Melou Garabett, “I know all of the political parties now and how the political system works.” Knowing more about German laws helped him a lot.

Melou Garabett personally had a bad experience with migration counseling (MBE), because there were too few counselors for refugees and also because the counseling about finding work in Germany was often not oriented towards what the refugees really needed. Now, work is his key to being accepted in German society:

“A refugee who works is no longer a refugee; instead, he’s a colleague,”