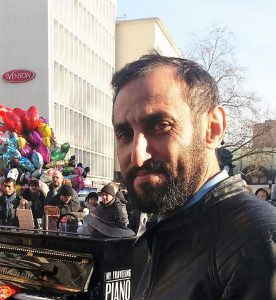 This year and last year, Turkey was the country that took in the largest number of refugees worldwide: 2.5 million people. One of these refugees was Mohammad Kharfan. With his wife, their five children, his sick mother, and other family members, he lived in Turkey for six months, a few hours away from Istanbul. Life in Turkey was difficult for his family. As a street vendor, Mohammad Kharfan, whose profession is actually as a writer, could barely support his family. “In Turkey, there was no way for my children to go to school regularly,” he reports. He was also very worried about the health of his children, “because in Syria they experienced such terrible things,” says Mohammad Kharfan. Hoping to improve his and his family’s living situation, he applied for a Canadian admission program. The Canadian administration told him that his family would not be allowed to enter the country until December. Consequently, he decided to take his family to Germany through an unusual method and paid a lot of money to a human trafficker.

“We waited four days and three nights on the beach, but no one came,”

says Mohammand Kharfan. The smugglers had cheated the family out of their money and left them in the lurch.

Five months after the failed attempt to flee Turkey, the family received a call explaining that they could interview for admission to Germany. “I had to drive on that same day to the German embassy in Istanbul,” reports Mohammad Kharfan. After his conversation in the embassy, he received a call on the same day. He had to get various papers translated as soon as possible and then submit them again. This meant that the family had to travel back to Istanbul, which was exhausting. Fifteen days after the conversation in the embassy, the approval came for him, his wife, and his children to be admitted to Germany. “We had to decide very quickly about the admission,” he explains, “there wasn’t even enough time for me to discuss everything completely with my wife.” In April 2016, the family entered Germany through the resettlement program. The trip was stressful and wearisome for the family. Mohammad Kharfan had to leave behind his brother, his brother’s family, and his sick mother in Turkey. But when he sat with his family members on the plane, he said to his wife, “This is like a dream. I can’t believe that we’re flying to Germany.”

Today, the Kharfans live in Lower Saxony. At the beginning, volunteers supported the family. Unfortunately, the contact faded, which Mohammad Kharfan regrets. Where he lives, there were not enough translators to support the meetings with authorities or other meethings.

“I was often in situations in which I would have to sign things, such as contracts, which I did not really understand,”

criticizes Mohammad Kharfan. He also says that more translators need to be made available in the resettlement admission process, so that every step of the process can be clear and transparent for the refugees.