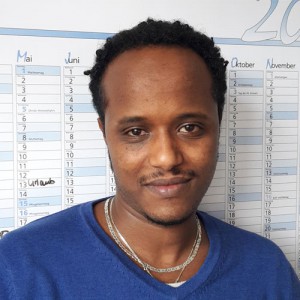 Dawit Weldaab entered Germany in 2012 through the resettlement program. The 29-year-old was born in Eritrea and lived in Ethiopia with his family for several years. As an Eritrean citizen, he did not receive a regular residence permit. Dawit could only go to school limitedly and later had difficulty finding work as a car mechanic.

“In Ethiopia, I was a second class person.”

In 2007, he went to Sudan. As a Christian, he had many problems there as well. He continued traveling and reached Libya. Due to the civil war there, he fled to Tunisia in 2011. He lived there for one and a half years with roughly five to seven thousand people in the Choucha refugee camp. In this camp, there was a great deal of conflict between different nationalities, it was very hot, and there were also snakes; all of these things made life there very difficult. In Choucha, he was able to register for the German resettlement program through UNHCR, and he entered Germany in September 2012.

After his arrival in Hannover, he was sent to the Friedland border transit camp (GDL Friedland). There, he took the so-called “Wegweiserkrus” (orientation course), in which he began studying German and received information about various topics (e.g. education and healthcare in Germany).

Dawit explains that it was the first time he coud relax after his long journey:

“For us, being in Friedland was like being in paradise, since we had come from such horrible circumstances.”

After a two-week stay in Friedland, Dawit Weldaab was notified of the city in Lower Saxony in which he lives today. He describes his first contact with the local administration as very difficult due to the language barrier.

A big help for his first steps in his new home were the Caritas migration counselors and various other volunteer groups: “Luckily, we got to know a couple of volunteers who supported us. I’ll never forget them.”

Today, Dawit is satisfied with his life. He lives with his girlfriend and their daughter, successfully completed his integration course, and works as the housemaster of a local church community.

In the future, he would like to continue pursuing his own career path again: “Being a mechanic is my dream. If I accomplish that, then I’ll have everything!” Dawit Weldaab is very grateful to Germany for allowing him to start a new life through the resettlement program. When asked if Germany could change anything about the admittance program, he sad:

“When thinking about resettlement, Germany must consider that some refugees have no experience with government agencies and applications. For me, that was the case, and I had to learn how to do that first.”

In conclusion, it is very important to him that he mentions that he wants to independently make his own path now: “I don’t want to always need help.”