Continuation of the humanitarian admission of Syrian refugees from Turkey

Monthly arrival of up to 500 people under the framework of the EU-Turkey Agreement. 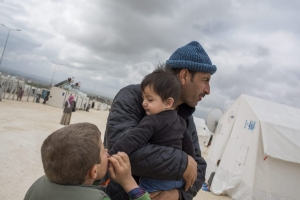 A Syrian family who was resettled from Kobane, Turkey. Photo: UNHCR/Ivor Prickett

The acceptance program for Syrian refugees from Turkey begun by an order from the Interior Ministry on January 11, 2017, which ran until January 8, 2018. The Ministry decided in December 2017 to continue the German engagement in the program by allowing the acceptance of up to 500 people a month until December 31, 2018. The measure was passed by the chief local government authority.

Extension in the framework of the EU-Turkey Agreement

This program stems from the agreement (March 18, 2016) between the EU and Turkey. Pursuant to the agreement from the Interior Ministry from December 2017, the EU and Turkey explained the goal of the arrangement being “to end the irregular migration from Turkey to the European Union, to combat the business model of human traffickers and allow those seeking protection a safer alternative.”

15.114 people were accepted within the framework of the EU-Turkey Agreement by various EU member states (as of July 30, 2018). The agreement has faced criticism since its implementation. The contents of the agreement have not changed since 2017. The administration of health examinations was taken up as an additional point by the federal states. It was noted that the International Organization for Migration (IOM) should conduct health examinations for the BAMF in Turkey and have the data send to the appropriate federal states.

The current process of the humanitarian admission process

The selection of the protected people through the acceptance system is carried out from Turkey – alike the former arrivals from the EU-Tukey resettlement program – by the Federal Office for Migration and Refugees (BAMF). Syrians along with individual cases and stateless persons who can prove their identity and their current residence in Turkey can be accepted for the admission.

Syrians in Turkey cannot apply through the BAMF or UNHCR for admission. The Turkish migration agency compiles lists and suggestions from which the BAMF may select refugees for the program through a test process (in association with the UNHCR) . In contrast to the previous humanitarian admission program for Syrian citizens (2013-2015), suggestions cannot be made by those residing in Germany.